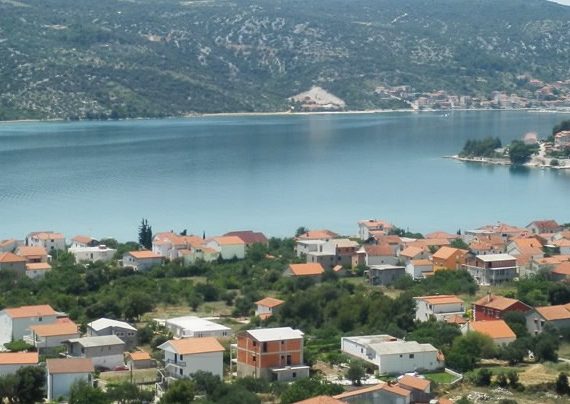 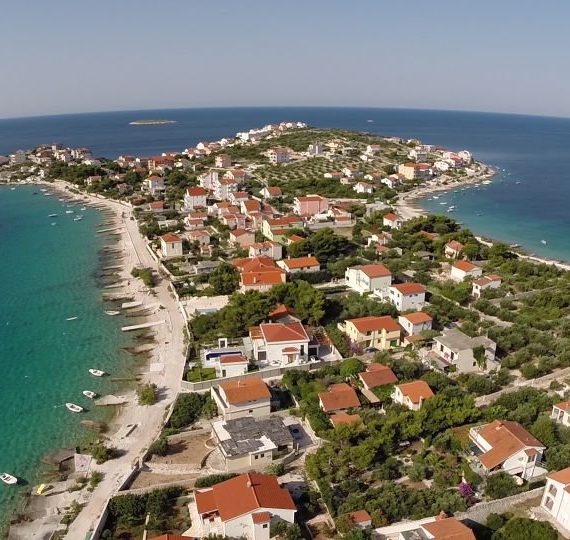 Sevid is an ideal place for a quiet holiday away from the city noise and large tourist centers. Accommodation in Sevid can be found in one of the luxury villas, holiday homes or in one of the many apartments and there you can enjoy the untouched nature and crystal clear sea. On the southern slopes of Sevid, in the area Krč, there are archaeological remains of the Church of St. Vitus, after who Sevid was named. In Sevid you can enjoy the crystal clear sea on one of the many beaches and hidden coves that are found throughout the peninsula.

One of the most beautiful coves is Stari Trogir (Old Trogir), which is also an archaeological park, adorned with sandy beaches, clear water and the remains of a Roman villa. The buildings of the complex were built on the cliffs which provides further into the sea and land towards the vineyards. The northwest-southeast orientation of the complex was determined by the configuration of the terrain. The height of the walls throughout the complex varies from 1 to 3 meters. The walls were built of rough-hewn stone, and have an irregular structure and connected with solid limestone and waterproof plaster. This archaeological site was not researched, and it is not possible to determine its purpose with certainty. 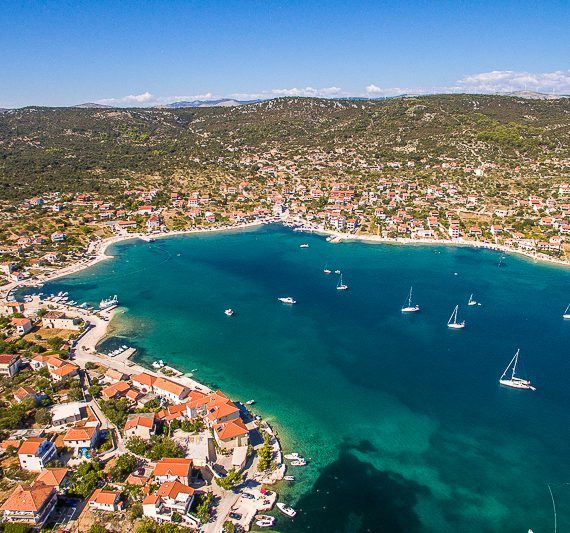 Vinišće, a small fishing village only 8 km away from Marina, provides a unique feeling of tranquility and peace. The place is located in a beautiful quiet bay with crystal clear sea water and untouched nature, and is ideal for lovers of quiet family vacations in private rooms, villas, apartments and holiday homes. Visitors who seek adventure but also cherish their privacy will enjoy exploring one of the many hidden coves, such as Voluja, Ljubljeva and Ričevo Vrelo. The exact time of the origin of the settlement remains unknown, but the name Vinišće was first mentioned in documents of Trogir canon from 1272. The cultivation of grapes in Vinišće dates back to Roman times, so the name of the place is derived from the vineyard (Vinišća, old Croatian word for vineyards). Vines were planted by former Roman soldiers in places with were favourable conditions, and Vinišće, with its protected bay and fertile soil was ideal for cultivation. During the Middle Ages the territory was divided into the Diocese, the lower coastal part, and Opatija (the Abbey) – the upper continental part. From the 9th to the 12th century in the Vinišće area monasteries and churches were built, and the ruins are still visible.

The town has several beautiful churches. Church of the Blessed Virgin Mary (St. George) in Orihovica was founded by Benedictine monks in 1272. It is surrounded by an old cemetery with stone tombstones, the so-called “stećci”. Church of St. Anthony of Padua (Our Lady of Mount Carmel) was built in the 18th ct. in Vinišće itself. The new parish church of Sacred Heart holds a picture by an unknown painter from the 19th ccentury. The church of St. Joh, situated on the cape Ploča, was built in 1332. According to the legend, it was built on the exact spot where Blessed John of Trogir miraculously saved castaways from Šibenik whose ship had sunk. The famous Renaissance sculptor Ivan Duknović was born in Vinišće around 1440. His house was near the quarry Voluja from which he took the stone for the Trogir cathedral. He created statues in Rome, Venice and elsewhere. His stone relief “Madonna with a Child” is placed today above the tomb of Pope John Paul II. 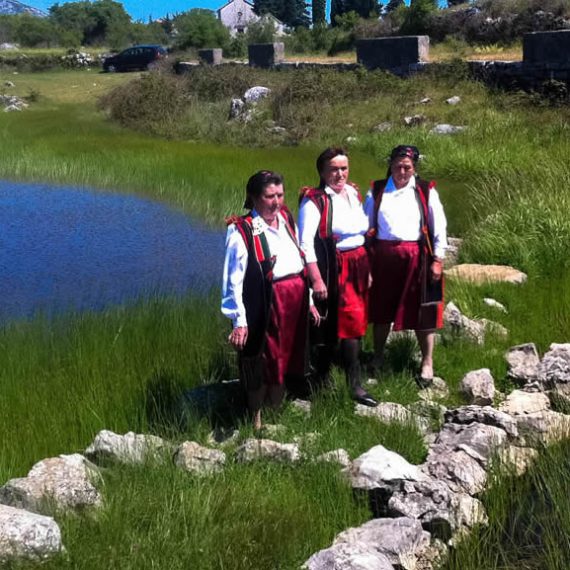 If you go for a few kilometres further inland you will experience the authentic atmosphere. This exceptionally well-perserved area is rich in many archaeological sites. This is an area in which are preserved the orginal Dalmatian traditions and culture with its customs, costumes and local gastronomy. Almost untouched nature and numerous well preserved traditional villages with the orginal stone houses stand out. Village Blizna (Blysa), situated between villages Bristavice and Mitla, at the foot of the mountain Vialja on the territory of the medieval Drid county, was first metioned in 1251. It was long claimed by both Šibenik and Trogir. St. Mary’s Church from 9th century, which was mentioned in Trogir’s documets in 1300 , is situated out of village.

Around the church is a cemetery with medieval tombstones – “stećci“, and old gravestones, and an Early Croatian necropolis was discovered in 2000. The cemetery belonging to the village Blizna Gornja is an archaeological site in a karstic field on the very border between Trogir and Šibenik, on a location abundant in spring water and with a puddle which never peters during summer draughts.